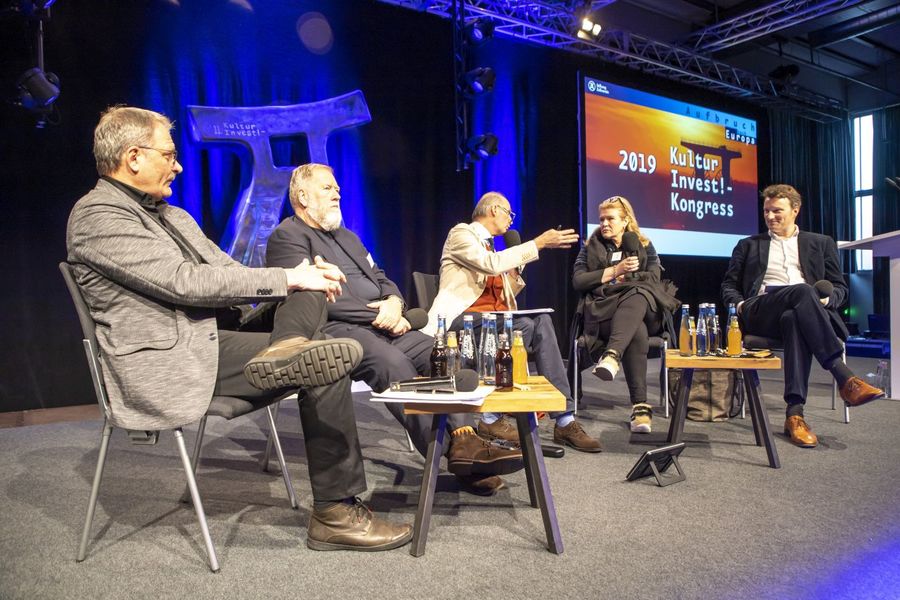 Cultural Policy Recommendations for Action of the Protagonists of the CultureInvest! Congress 2019

Under the precept " Heading for Europe! Transform the Culture", over 100 visionaries, utopists and cultural specialists presented the latest trends in the European cultural market at the CultureInvest! Congress on 7 and 8 November 2019 at the UNESCO World Heritage site Zollverein in Essen, reflecting the development perspectives of cross-border cooperation between culture, business, the public sector and the media as well as the digital revolution. With 500 cultural managers taking part, including cultural politicians such as Michelle Müntefering, Minister of State for International Cultural Policy at the Federal Foreign Office, Isabel Pfeiffer-Poensgen, Minister of Culture of the State of North Rhine-Westphalia, and Martina Münch, Minister of Culture of the State of Brandenburg, Europe's largest cultural congress set an example for a cosmopolitan Europe with the bestowal of the European Cultural Brand Awards. https://kulturmarken.de

For more than ten years, Europe's largest cultural congress has stood for innovative thinking ahead, lively debates and successful solutions in a broad spectrum of cultural policy, cultural management, cultural marketing, and cultural tourism as well as in the field of tangible and intangible investments in culture.

In cooperation with the Kulturpolitische Gesellschaft and the radio station Kulturradio WDR3, a final debate was held under the motto "Heading for Europe! Transform the Culture” under the moderation of Dr. Michael Köhler, broadcast by WDR3 on 17 November 2019 from 18:04 to 19:00. The most salient quotations and cultural policy recommendations of the CultureInvest! Congress 2019 and its final forum are summarized below.

In her opening speech, Prof. Dr. Ulrike Guérot pointed out two options for the future of Europe: "Either back to the past - or actively shaping European democracy". The democracy researcher and political scientist is a passionate visionary of a post-national, European Republic of Regions and its citizens. She also proclaimed "equality of rights instead of cultural uniformity for all European citizens".

"Culture has the potential of a social avant-garde. Creative artists: make yourself capable of speaking", is the call of Dr. Hagen Lippe-Weißenfeld to all cultural managers. "We must stimulate innovation, since goals result from visions - and courage is needed to achieve them," he recommended with an eye to cultural policy.

Media manager Prof. Dieter Gorny called for "more mutual translation of culture, business and politics, calling on the cultural managers present: "Culture must come out of its convenient resonance chamber!” In this context, Gorny also called for a European Commissioner for Culture as well as a “digital Bauhaus” or a European Digital Academy - places where ideas can be quickly turned into reality.

Prof. Dr. Hans-Peter Noll, the most prominent property developer in the Ruhr area and Chairman of the Board of the Zollverein Foundation, stated: "We need more experimental laboratories and test sites for our utopias and visions, such as the Zollverein colliery heritage site". He appealed to the politicians: "For the development of locations under the banner of "preservation through conversion", we need grants for such projects in order to bring them to life.

Hedwig Fijen, the newly proclaimed European Cultural Manager of the Year 2019 and Director of the Manifesta Nomadic Biennial, recommends European cultural policy to promote "more diversity in personnel structures in order to grow together in Europe, as well as a setting up European Erasmus programme and a funded European Voluntary Year of Social Service for cultural providers.”

In the 12 thematic fora of the CultureInvest! Congress, cultural entrepreneurship, cultural tourism, the revitalisation of historical sites, cultural education, urban culture, cultural transformation, marketing and financing strategies were thoroughly discussed and ideas for the European cultural market were jointly devised. After the two intensive congress days, the participants agreed that this congress is currently the most innovative forum for the transfer of knowledge between culture, business and science.

Hans-Conrad Walter, long-time organiser and Managing Director of Causales, welcomed the guests on the first day of the congress with the words: “With your ideas you will shape the future of Europe"! He drew a positive balance at the end of the congress: "The ideas, visions and utopias have been formulated; now the work begins". The next CultureInvest! Congress will take place in November 2020 in another federal state: "We always go where we are needed".