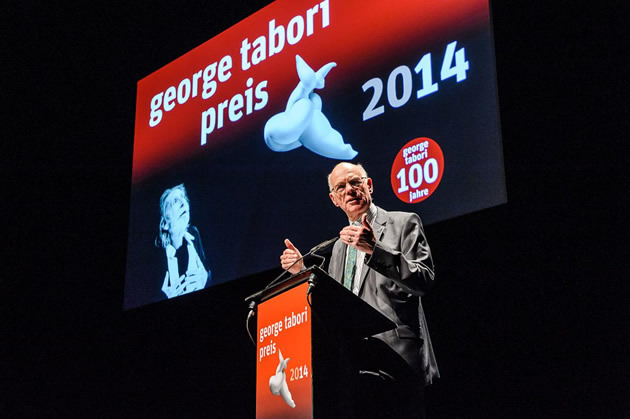 On 22 May, guests of the Causales Business Club were invited to the House of the Berlin Festival for the prize-giving of the “George Tabori Prize” which is given annually by the Performing Arts Endowment Fund. The prize is one of the most important art prizes in Germany as evidenced by the international broadcasts and is endowed with a total of 40,000 euros. German Federal Parliament President Norbert Lammert was only able to be present briefly because of having to attend special votes in the German Parliament but he still impressed the approximately 800 guests with his brilliant rhetoric.

The main prize went to the Berlin Opera Company NOVOFLOT. The promotional award and the endowed residence in Kühlungsborn “inspired by the Cultural Society of Mecklenburg” went to the Children’s and Young Person’s THEATER o.N.  The honorary award offered for the first time went, after a eulogy by the President of the Goethe Institute, Mr. Klaus-Dieter Lehmann, to the Berlin company, SASHA WALTZ & GUESTS.

After the entertaining award of prizes, sustained by the humor and passion of the moderator, Günter Jeschonnek, Managing Director of the Foundation for the Performing Arts and originator of the “George Tabori Prize”, the evening tapered off with good speeches, music, finger food and refreshing beverages. The winners included such sponsors as Pilsner Urquell, fritz-kola, united catering services, C. Bechstein, Röntgen Classic Bakery and the Berlin doctor, Dr. Gunhild Kühn. Other guests included ambassadors and cultural attachés, Secretary of State for Culture Tim Renner; Tobias Fröhlich, Press Spokesperson for Axel-Springer-Verlag; Rainer Achterberg of Gothaer Insurance, Dörte Knott of the Berlin Savings Bank and many more.

Additional information: The Foundation for the Performing Arts e.V. which was founded in 1985 has since 1988 promoted outstanding projects in all sectors of the performing arts; they are distinguished by their special quality, are of national significance and contribute to the further artistic development of the performing arts.